‘A fine debut novel: highly readable and hinting at even better to come.’

No Fireworks in brief – from the Faber site:

Abe Stone is a 61 year old alcoholic with a Henry VIII fixation going through his third divorce. When he starts receiving letters from his dead mother, Evelyn, he is thrown into a late-stage identity crisis. His fourteen-year old grand-daughter, Lucille, is expelled from school and the couple embark on a quest to work out what Evelyn is trying to impart and how Abe can begin to put his dishevelled life in order. No Fireworks is a compelling, funny and poignant story about eight extraordinary days in the life of an ordinary man who can no longer put off answering the big questions: ‘what do I believe in? Where do I belong? Why is my dead mother sending me letters from beyond the grave?’ 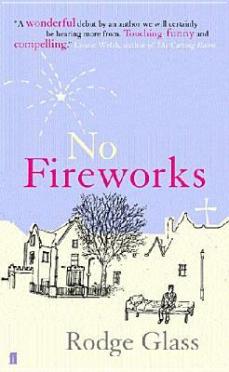 More Praise for No Fireworks:

‘A wonderful debut by a writer we will certainly be hearing more from. Touching, funny and compelling.’ Louise Welsh, author of The Cutting Room

‘Glass has jumped on the Jewish bandwagon…even your house plants will work out what happens at the end.’

‘A superb debut novel…Like the best tragic comedies, it is written with a pin-sharp sense of character, isn’t afraid to take swings at the deepest subjects and can spin between the two modes at will.’

You can buy No Fireworks here.